Everything you need to Know About the 2019 Mazda MX-5

The Mazda MX-5 is a rare gem here at Moffatt’s Mazda; a two-seat sports car that doesn’t rely on a large amount of power to deliver a tremendous driving experience. Of course, a little extra power never goes amiss, does it? And if you do subscribe to that particular point of view it will come as welcome news the manufacturer really is bringing more power to the 2019 Mazda MX-5. So, here’s everything you need to know about the 2019 Mazda MX-5.

Even though the MX-5 has never been renowned for having a great deal of power under its hood, this current fourth-generation version of the world’s most popular sports car is already the most powerful MX-5 to date. Despite that fact, there are always those who want more, and Mazda is certainly delivering it for them this year. The latest version for 2019 will still have the familiar 2.0-litre inline-four under the hood, but this year it’s been given a thorough overhaul to make it even better and improve the whole MX-5 experience even further.

Mazda’s Skyactiv-G unit will remain the sole engine for the MX-5, but it will now be able to boast an extra 26 horsepower and 3 lb.-ft. of torque to produce a total of 181 horsepower and 151 lb.-ft. of torque. These improvements have been achieved thanks to a key number of changes. For a start, the redline is now significantly higher at 7,500 rpm instead of the previous 6,800 rpm, which matters because the full 181 horsepower doesn’t kick in until reaching 7,000 rpm. Additionally, peak torque now arrives earlier than ever, so the 151 lb.-ft. arrives at 4,000 rpm instead of the maximum being delivered at 4,600 rpm before.

Apart from a new brown soft top roof option and some new 17-inch alloy wheels, nothing is really changing on the outside of the Mazda. But considering what a gorgeous car this is anyway, it’s hard to imagine too many complaints.

The inside does get more work done to it than the outside for 2019 though. Interior upgrades include a telescoping steering column and a standard backup camera that are firsts for the MX-5, and new active-safety features that are optional, which is good news for those drivers who’s only interest in semi-autonomous tech and driver aids is how to turn them off. It’s also said the doors are somehow now easier to open and that the cup holders and seat controls have been revised to be more user-friendly.

The 2019 Mazda MX-5 goes on sale in the fall of this year, so get in touch with us here Moffatt’s Mazda right now to be first in line to experience the improvements for yourself on a test drive when it finally arrives. 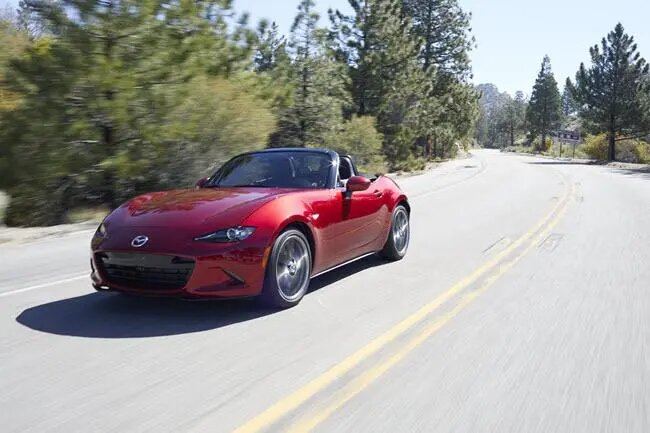